Romania – “I do not know what Mr. Dragnea is scheming over there with the Jews.”

This rather unprofessional statement, publicly stated yesterday by an ethnically German EU head of state, and which, if it had been uttered, for example, by a man from the Austrian FPÖ, would certainly have monopolized the front pages of the Western press, went literally unnoticed.

The head of state in question being the Romanian President Klaus Johannis, this overwhelming silence confirms an already old suspicion: vis-à-vis Visegrad and the other troublemaker states of post-communist Europe, the euro-globalist propaganda machine now works in “Ukrainian mode” – Kiev being the place where this curious device of selective blindness was field tested, making any Western journalist on the spot insensitive to all the visual, audial and textual stimuli (swastikas, SS military marches, vocabulary copied and pasted from the 1930s) that these same journalists, at home in the West, track down in the discourse and appearance of patriotic, sovereignist or nationalist movements with a meticulousness of which the Holy Inquisition would be jealous.

Aggravating circumstance: the author of this peculiar sentence, before being – as of late – co-opted by the National Liberal Party (the new Romanian ship of the globalist navy, after the sinking of the USS-Băsescu) which took him to the presidency, was mayor of Sibiu, a Saxon town of Transylvania. Klaus Johannis, of course, cannot be blamed for the fact that the Transylvanian Saxons, several decades before he was born, massively adhered to Hitler’s European project, enlisting in large numbers in the SS (a decision, moreover, for which they paid a high price during the Soviet “liberation” of Romania). On the other hand, it is undeniable that the Saxon ethnic party in whose ranks Johannis began his political career is the official heir of an organization affiliated to the Third Reich. Far be it from me to encourage any kind of witch hunt, but imagine for a moment that we discover such historical links between, for example, Viktor Orbán or Robert Fico and the collaborationist past of Hungary or Slovakia: the double standard is glaringly obvious.

It remains to be seen why the Bucharest Saxon gave the Western press such a perfect opportunity to unmask itself as a cynical propaganda tool with such selective indignations. With less than two years to go before presidential elections that he does not seem to be able to win, did this good friend of Chancellor Merkel really hope to capitalize politically on a possible mass anti-Semitism of Romanians? It’s unlikely. His poor command of Romanian, which may have facilitated the blunder, is not enough to explain it either. So it seems that the very pro-LGBT Klaus Johannis, the day after the failure of a bicycle ride to work intended to boost his popularity (resulting in the painful realization of the fact that passers-by in Bucharest did not recognize him in the street), – almost literally – came off the wheels. We can also find confirmation of this suspicion in other statements of the last hours, the same Klaus Johannis asking, for example, in a crisis of unconcealed fury for the departure of Prime Minister Viorica Dâncilă (a move for which he doesn’t have constitutional capacity); Viorica Dâncilă is also the right hand of this same Liviu Dragnea, leader of the ruling Social Democrat Party, who is “scheming with the Jews”.

Why so much panic? To understand it, it is necessary to return to the context of this verbal slip. The “Jews” we are talking about here are the Israeli authorities, starting with Prime Minister Benjamin Netanyahu, to whom Dâncilă and Dragnea have come to make an official visit to Tel Aviv. What can Liviu Dragnea possibly “scheme” with them?

This same Benjamin Netanyahu is one of the few heads of state of the (lato sensu) Western world who noisily rejoiced over the victory of Donald Trump a year and a half ago, and that of Viktor Orbán three weeks ago. This same Liviu Dragnea is the man who, within the ruling PSD in Bucharest, operated an unheard of geopolitical shift a little less than a year ago, breaking with a certain magyarophobic tradition (maintained until very recently by his unfortunate rival Victor Ponta) to conspicuously move toward Budapest and the V4. He is also the privileged target of a politico-judicial apparatus inherited from the Băsescu regime, whose links with the CIA of the Obama era are notorious, and the Romanian politician most vilified by the low-intensity maidan which for over a year has been littering the streets of Romanian cities, and in which the involvement of the many Romanian activists of the Soros galaxy is obvious. The same Georges Soros, whose Open Society Foundation is leaving Budapest for Berlin as we speak, Viktor Orbán’s FIDESZ having made it clear to him that he would from now on be held accountable for “philanthropic” interference in Hungarian political life. This same Berlin, which – through its vast Romanian network of foundations and political and economic allegiances – has always been Klaus Johannis’ strongest supporter.

So much for the facts. Let’s add some backstage noises. In Romania, the overwhelming victory of FIDESZ in the Hungarian elections on April 8 was greeted by a euphoria tempered only by regret – tinged with jealousy – to see the Hungarian neighbor regain its sovereignty and not have at the same time “a man like Orbán” in Bucharest to ensure that Romania does not come out as the looser af the new Central-European construction underway. After more than a year of rather pusillanimous reactions to the Western aggression against him, would Liviu Dragnea have heard this deep sigh of the people? In any case, this is what a statement he has made very shortly after the announcement of the Hungarian results suggests, saying he wants to organize in May a mass-demonstration (implicitly modeled on FIDESZ’s Peace Marches) intended to oblige Klaus Johannis to finally respect the constitution by organizing a referendum on the family, sought for months by various conservative actors in Romanian civil society, starting with the very active Coalition for the Family. These organizations having gathered (well over) the number of signatures legally required, Klaus Johannis indeed violates the Romanian constitution by refusing to organize the referendum on the pretext that the signatories (i.e. millions of Romanians, likely to include a part of his own 2014 electorate!) would be “religious fanatics” (sic) – the purpose of the consultation being to include in the constitution (as in Hungary) the “heterosexual character” of marriage. This is an extremely sensitive theme in Romania, not only because 95% of the mostly Orthodox Romanians declare themselves to be believers, but also because many of those over 40 keep a vivid memory of the 1990s, during which Romania attracted the greed of various networks of child trafficking, rushing to take advantage of the bonanza of crumbling orphanages full of abandoned children (collateral victims of the ban on contraception which was part of the natalist policies of Nicolae Ceauşescu). It also seems that one of Klaus Johannis’ first contacts with the West was acting as an intermediary on behalf of adoption organizations based in Canada. This is a leitmotif that can also be found in the biography of Donald Lothrop, “the American who fell in love with Romania” who, through his foundation Romania One, operates the website Press One, a spearhead of the Atlanticist press in Romania, which strives – among other things – to stoke the flames of Russophobia and the fear of Viktor Orbán.

This societal theme can therefore be considered – in terms of mobilization potential – as the Romanian equivalent of the theme of the migration crisis, upon which surfed the campaign of Viktor Orbán, Hungary being a less religious, more feminist and sexually more permissive country than Romania – but also more aware of its collective identity and the interest of having borders. However, even if the pedagogy of the example could be more than enough to explain the regional wave of emulation surrounding the FIDESZ tsunami, it is whispered here and there that the same Israeli gurus of the political communication which may have contributed to define the concept of the FIDESZ campaign are now also working on a PSD victory in the Romanian presidential elections of 2019. Which, if true, should indeed give the Cotroceni Palace cyclist the sweats.

One disturbing detail: while the aforementioned gaffe constitutes – as far as I know – the first public outburst of some repressed anti-Semitism on the part of Klaus Johannis, his perfectly unconstitutional request for the PM’s resignation – based on the certainty of all Atlanticists that they embody “democracy” and the “rule of law” – is not the first of its kind. Elected president for ten months but still lacking a parliamentary majority to form a government, in September 2015, he also asked for the resignation of the PSD government of Victor Ponta, who initially turned him down. But he finally obtained it on October 30, 2015, following the “Colectiv tragedy”, i.e. the – supposedly accidental – fire of a packed discotheque in Bucharest which resulted in a large number of deaths and severe injuries; although this was largely a municipal responsibility, this heavy bill was charged to the government’s balance sheet by a Romanian press largely dependent on Western capital and largely supportive of Johannis. The balance (or rather imbalance) of forces in the Romanian media arena being – for the most part – the same as in 2015, we cannot recommend strongly enough to our Romanian readers that they avoid concerts in confined spaces during the next few days, and instead take advantage of the good weather and attend outdoor festivals or organize barbecues with friends. 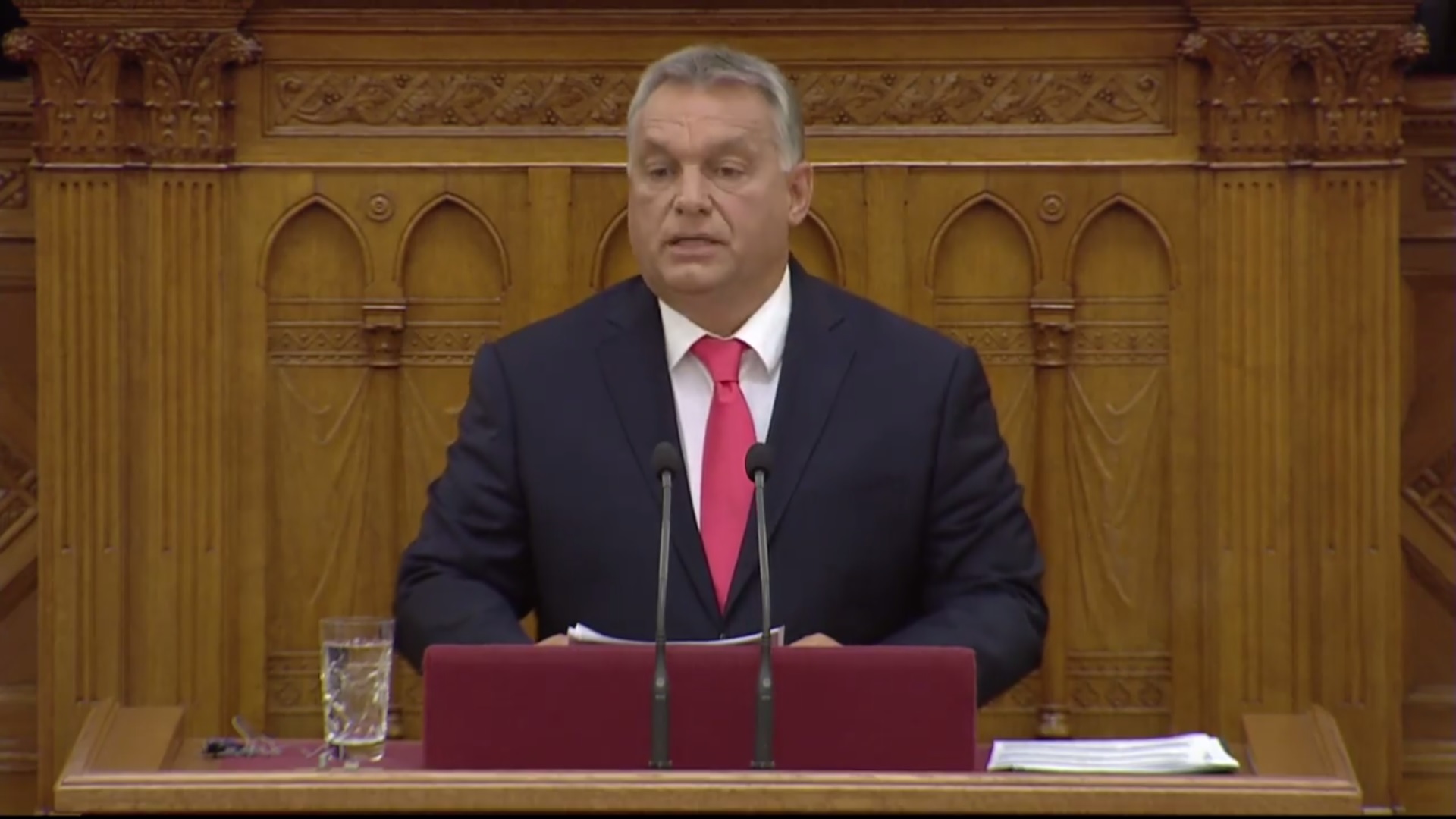 Cdl. Schönborn: Europe’s Christian legacy is in danger because we have squandered it