This article has been published online by the Magyar Nemzet on May 1, 2021.

US Secretary of State: „We urge the Hungarian government to promote an open media environment”.

Our lives are a series of all kinds of urgent things. For example, despite the horrific fanaticism of the abortion god, we must be born, which is the hardest thing today as a white, Christian, straight man. Sooner or later, they will blame you for being born this way.

These days, those who want a child most often cannot have children due to their natural being. Gays, men operated into women, women operated into men, and other degenerates. They hold serious conferences every morning about the expansion of humanity and the destruction of the earth, so the progressive and “woke” realize that they shouldn’t have children – cf. “a baby produces huge amounts of carbon dioxide”. These same people hold much looser conferences in the afternoons on how they want to have children, to adopt, concoct them in flasks because it is their inalienable right. And, of course, it is the duty of the majority of society to tolerate and pay for all of this.

And the majority of society is still afraid to give the right answer to them because we witness horrific executions in such cases. These take place in the so-called „public” virtual spaces – but if we observe the activities of the BLM or other Jacobin-Bolshevik-Marxist organizations, we find that virtual executions are turning into real-life executions and lynchings at unprecedented speeds; the „independent” media comes to understand in the morning and then celebrates in the afternoon – cf. „freedom and democracy”.

Moreover, the majority of society doesn’t have time to give an answer because they have urgent things to do. Giving birth to children, working, creating, adding something to his majesty, the GDP – cf.: „His hog body was nauseating / He shook. I stroke him, though aghast / ‘Come, see who I am’ (I whispered) / Then holed my head and through the shaft / He looked inside my brain and laughed.” (Battle with the Lord Ady Endre) And all of this is necessary because, among other things, BLM activists wouldn’t otherwise be able to take anything home from supermarkets during their looting, and let’s face it – that would be the end of democracy.

In a word, we have so many urgent things that we don’t even have time to be jealous of Regős Bendegúz, who, back in the day, wisely said: „I never had anything urgent in my life, yet even so, I ran so much that it was too much.”

And unfortunately, we don’t have time either to answer the American Secretary of State who, like so many of his predecessors, pictures himself as the governor who will tell the colonies and tell them how to do things.

So, Mr. Blinken, there should be a „free and independent” press here true, because as you said the other day so wisely, „a diversity of voices, diversity of independent opinions, that is the fabric of democracy. We certainly urge the government of Hungary to promote an open media environment.”

Understood. So now, all we want to know is what exactly an “open media environment” looks like? We ask, could CNN be a good example for us out here in the wilderness of Asia? Because if so, let me quote for the Secretary of State the conclusions – which all of us here in Hungary are well aware of – from the Firewall Group (Tűzfalcsoport): „One of CNN’s executives spoke openly about the company’s inside secrets, its strategic left-wing commitment and defamation of the right. Among other things, he revealed that the narrative of the BLM movement is determined by central direction, They try to make US President Joe Biden appear athletic and fit, And they are even preparing for the reports following the coronavirus which will most likely cover global warming <<they need the alarming content>>. But the head of CNN also discussed the art of manipulation revealing how they try to influence public opinion.
Of course, his lowest point was openly saying that essentially, it is thanks to CNN that Republican ex-President Donald Trump lost the 2020 elections. We couldn’t find a better example of left-wing terror ourselves: when sensitive footage of CNN was published, social media sites (Facebook and Twitter) banned journalists who exposed the left-wing news channel.
Incidentally, a recording was leaked last year from the channel where, in the last moments of the US presidential race, CNN leadership was convincing the editorial staff to negatively portray Trump’s coronavirus condition. In another recording, CNN’s president Jeff Zucker asks for Biden’s son’s suspected corruption cases to be silenced.”

We understand and we are familiar with this! Biden the „sporty” gentlemen who falls three times up the stairs with his dentures… back in the day, Comrade Brezhnev, who was mounted on brackets, was also another one of these sporty guys. But the peak performance of the „open media environment” was not that –rather the complete silence in connection with Biden and his son in Ukraine, and even trying to tie it to Trump. We wrote in our paper the other day, for the umpteenth time:

„Hunter Biden’s name came to the forefront of international media interest in the finale of last year’s US presidential campaign after the conservative New York Post published documents allegedly from the US President’s son’s laptop that provided further evidence of corruption cases in Ukraine. The email exposed by the daily showed that Hunter Biden had introduced his father, then vice-president to Barack Obama, to the top executives of the Ukrainian energy company Burisma a year earlier; later, abusing his position, Biden Sr put pressure on Ukrainian government officials to fire the State Prosecutor investigating the Burisma case.
Another scandal stemmed from this case as Facebook, Twitter, and the mainstream left-wing media did everything they could to prevent the documents published by the New York Post from appearing or spreading on social media.”

Then a committee was assembled to examine how Trump put pressure on the Ukrainians. Meanwhile, CNN and everyone else was occupied with making sure that the Bidens’ Ukrainian affairs stayed hidden from the public.

So far, this is all like some run of the mill soap opera, no? But the kicker is: „US President Joe Biden’s son, Hunter Biden, who was mixed up in last year’s corruption scandal, will be holding a ten-week-long course on fake news as a guest professor at Tulane University in New Orleans.”

And I am so impressed that you are urging us to do the same. But you should know something: we work differently. I’ll explain and you’ll understand in a minute: back then, by us the biggest sin was being “anti-Soviet”. If you were „anti-Soviet” or were labeled that, well, you could see for yourself what would happen. Losing your job, being discriminated against, or in the worst case, going to prison. Well, we were anti-Soviet and held the US as a model example back when our Soviet friends called you a “Imperialist-capitalist-colonizing” power where “they beat the negroes”.

The situation has changed today. The Soviet friends back then and their offspring / descendants are some of America’s best friends and the most vocal about hating Russia. Today, being against America (and Brussels) is the biggest sin – and whoever is silent or not so enthusiastic about hating on Russia can sit and wait in shame.

And on earth happened that we’ve started hating you and loving the Russians? Now tell me Mr. Secretary of State, how can this be?

Naturally, there is a reason for this too. After all, you are behaving as the Soviets did back then; you speak of your own amazing and unparalleled grandeur, justice, superiority, democracy, and „open media environment” as Brezhnev’s comrades at the time. And here at home there is a never-changing political mass that knows exactly who they should hate and who they should love. They are never wrong Mr. Secretary of State – even woken up in the middle of the night, they know which ass to kiss. And that’s exactly why you like this mass, and you’ll soon be sending your respective mercenaries here with Nuland at the helm to support this mass in the election campaign.

Mr. Secretary of State, this is what you’re good at. „Exporting democracy”. And yes, you have so many successes in your global mission: Afghanistan, Iraq, and the incredible Arab Spring, oh and Ukraine too and the Euromaidan “revolution” which you reportedly spent billions of dollars on. Just, why on earth would CIA agents get dressed up on both ends of the square to shoot a couple of shots into the crowd. You became the inverted King Midas: gold turns to shit if you touch it.
And lest we forget, let’s mention why it’s so obligatory to hate the Russians: Because you found a ton of shale gas. It’s a good gas, just very expensive to extract. American companies have accumulated insane debts dealing with this – meaning shale gas has to be sold cheaply, by any means. The Russians have cheap gas, and Europe buys that; the Germans are even building a separate pipeline for this gas. Well, this can’t be! What will happen to the expensive American shale gas that has to be chugged across the ocean in enormous tankers to the European terminals, burning hundreds of thousands of gallons of diesel per hour? But no problem, because Biden will host Greta Thunberg and CNN will report on environmental efforts with a tearful performance.

Well, that’s why we have to hate the Russians so much. Because a Eurasian collaboration would simply put an end to your crumbling, silly, foolish, and softened realm where universities debate racist soap dispensers and BLM activists plunder cities in the memory of a criminal. (By the way, Navalny the big warrior was trained by you or the Germans? Or perhaps together?)

In any case, Mr. Secretary of State, it’s good that you know that we know, in fact we are all too familiar with your lot. We know for example that you will always have the intelligence service and „open media environment” capacity to silence and potentially imprison those who are not anti-Russian or liberal enough. There will always be enough “corruption cases”, “sexual harassment”, „adultery” that you will „uncover”; but if Clinton ever visited Jeffrey Epstein island, well, we’ll never know. In fact, when Monica Lewinsky was playing the flute in the Oval Office, and Clinton denied it, then you’re own Supreme Court ruled that oral sex doesn’t constitute as sex and thus is not adultery.

It’s good to work with you Mr. Blinken… But note the eternal truth learned over a lifetime by a colleague of mine: the world will always be built up by imperfect conservatives and will always be fucked up by perfect liberals.

In conclusion, allow for a correction. It is custom for us to mention that you have “Hungarian roots”. I would like to make this clear Mr Secretary of State, you are completely ROOTLESSLY Hungarian just as you are rootlessly American.

That’s exactly why your world is doomed for destruction. It’s unfortunate. And if I quoted Regős Bendegúz to begin, let’s close with his words as well: „I was always a well-intentioned kid, but when I got to the end of my intentions, they were bad.”

If I am well-intentioned, this is what I think of you. Less and less often. 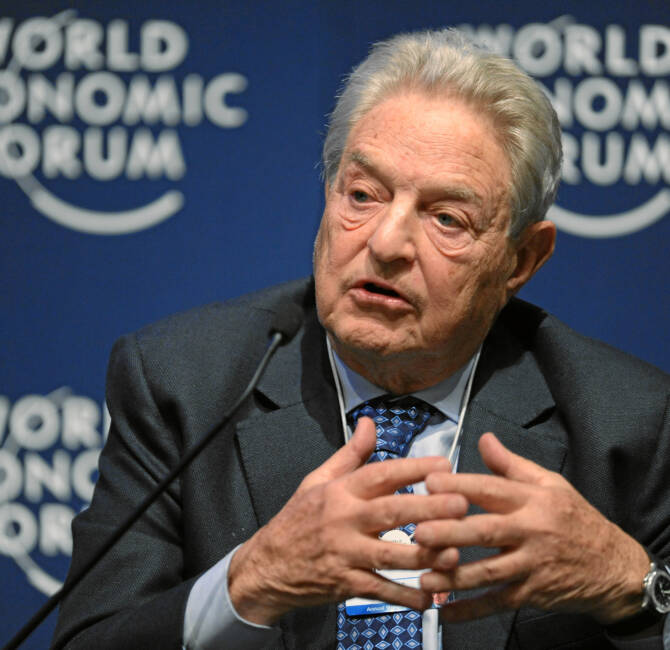 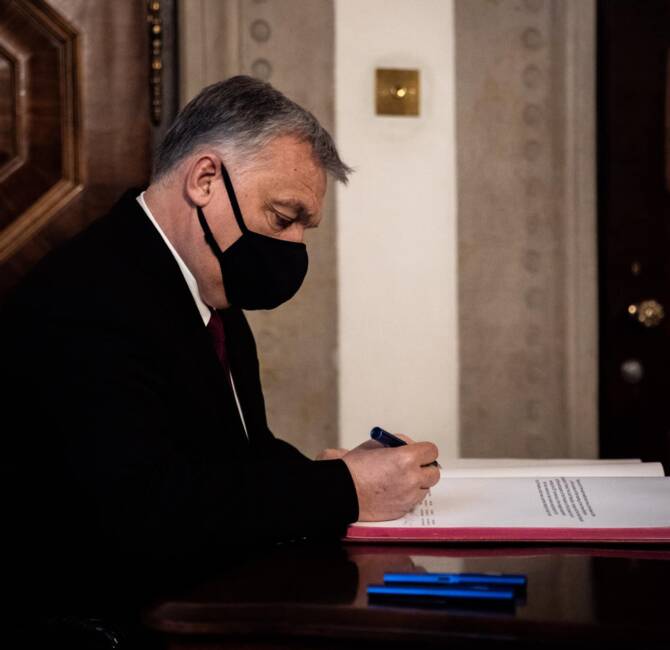