This article was published online by the Magyar Nemzet on July 10, 2021.

Who belongs in the European Union and who does not – that is the question.

If we were to ask the average, educated Hungarian compatriot somewhat interested in international affairs: what comes to mind first about the Netherlands? Most would probably answer with football, tulips and that beer with a red star. Then they might add the canals, windmills, red-light district, and of course the legal weed. The more learned might mention Erasmus, Rembrandt, Van Gogh and maybe even Thomas Kempis, Hugo Grotius, or Johan Huizinga.

But obviously few know who Lamoral was, the fourth count of Egmont, who will be celebrating his five hundredth birthday next year. He was one of the first leaders and martyrs of the Dutch War of Independence against the oppression of the Spanish Habsburgs, which began in the 1560s. Goethe wrote a romantic drama to which Beethoven composed the accompaniment in 1810 in protest of Napoleon’s tyranny in occupying his country. The Egmont overture, which is considered an anthem of freedom, was the most frequently played piece of music on the radio in the days of the 1956 Hungarian Revolution and War of Independence. The boys in Budapest fighting for freedom at the time had barely heard of the Dutch aristocrat and freedom hero, but the masterpiece of the genius German composer united, in spirit, the two nations who took up arms for freedom and independence.

And Count Egmont was just the first in a fairly long line. Thanks to the Calvinist Reformation, the seven Protestant provinces of the Netherlands maintained close ties with Transylvania. That is when masses of Hungarian Calvinist students attended Dutch universities like Utrecht, Groningen, Franeker, Leiden. The first doctorate of the new University of Harderwijk was awarded to one of the geniuses of Hungarian cultural history, János Csere Apáczai from Transylvania, who in the Netherlands recognized that the Calvinist Dutch founded all their academies during their struggle for freedom against the Spanish Catholic Habsburgs because they “realized that the weapons formed in schools are more important than cannonballs.”

The Netherlands was one of the countries where the Károli Bible was printed over and over again for centuries so that it could be distributed in Hungarian-speaking areas. On the wall of the main building of the University of Utrecht – a few meters from the hall where the united Netherlands was founded in 1579 – you can find a relief of a Hungarian student walking between the Reformed Great Church of Debrecen and the Utrecht Cathedral with the inscription: “In sanguine Christi conglutinati sumus” (Washed in the blood of Christ). This togetherness and solidarity were also expressed when in, 1676 the commander of the Dutch fleet, Admiral Ruyter, freed the Hungarian Protestant ministers from slavery in the Spanish galleys under the Viceroy of Naples. On the tomb of Admiral Michiel de Ruyter, in the depths of the coronation church in Amsterdam, you can still find the silver wreath from the Hungarians.

Today, few people remember that when Viktor Orbán wreathed the tomb of Admiral Ruyter in a grand ceremony on the occasion of 325th anniversary of the liberation of the Hungarian Protestant ministers in 2001, the Hungarian Prime Minister and his entourage were invited to a banquet at the Dutch government in the Hague. At the time, Wim Kok, a Labour politician, was leading the Dutch left-liberal government whose “biggest act” was to vote to approve euthanasia and same-sex marriage. With this, the Netherlands became the first such country in the world and has long been a stronghold for the LGBTQ community and ideology; Amsterdam even advertises itself as the gay capital of Europe.

The country which, from the XVI. century to the middle of the XX. century was centered on faith in God, especially Calvinism, in its small communities, school systems, culture, science arts and even public discourse, no longer resembles the “golden age” of the Netherlands, at most in its “paper mâché decor” (to use Huizinga’s expression). In fact, another pitiful example was taking out the royal carriage from circulation last year after BLM activists demanded so because one side of the carriage illustrates black people bowing and expressing their homage to a white woman – reminiscent of Dutch colonial times. This is a very frustrating aspect of Dutch history that still fills them with guilt today as evidenced by the mayor of Amsterdam who, in a speech on the Dutch Memorial Day for the abolition of slavery, apologized on behalf of the city for participating in the Dutch slave trade.

This is understandable of course, since the little Netherlands had one of the largest colonial empires up until the XX. century; thus, their legendary economy and prosperity was not just from the hard work of their citizens, but also the plunder of distant, subjugated peoples. Yet while the mayor of Amsterdam apologized for slavery, the liberal Dutch Prime Minister declared at the last EU summit that Hungary has no place in the EU if they keep this anti-pedophile law; he believes that this is no way to treat the LGBTQ community and therefore Hungary should be forced to its knees. As a historian, Mark Rutte knows perfectly well (but would never admit) that he is acting just like the cynical, violent colonial lords and slave traders of the former Dutch East and West India Companies, but unfortunately, he is not at all alone. Rutte (an amateur pianist) set the tone for the cries of the hyena choir during Wednesday’s “seance” by the scum that dominate the European Parliament; shamefully enough, the German President of the European Commission joined in as well.

These self-proclaimed democrats and progressives who consider themselves liberals, the neo-totalitarian-globalist dark forces and their agents, who try to outdo the “Übermensch” Nazis and the “special mold” (see Stalin) Bolsheviks, believe they will find their newest colonies in Central European countries. Well, this is not going to happen. But no matter how legitimate our anger is, it cannot be directed against the Dutch (nor any other) people.

For us, the Dutch people are not represented by the “Dutch guy” and his client, friends, and business partners who are watering the flowers of stupidity, arrogance, and hatred. But rather, by Aletta van der Maet, immortalized in a beautiful poem by Lajos Áprily; Aletta van der Maet married Apáczai in Utrecht and followed him to Transylvania. Or the former prime minister Abraham Kuyper, the famous Calvinist theologian-pastor who passed away a hundred years ago; his daughters organized travel and care to the Netherlands for thousands of poor Hungarian children living in areas torn away from Hungary after the Treaty of Trianon. Or one of the most brilliant spirits of modern Europe, Erasmus of Rotterdam, whose strongest desire was for all children, even the most common, to read the Scriptures every day.

And of course, Count Egmont, who, thanks to Beethoven, forever connected in spirit the two freedom-fighting peoples who will never kneel for anyone. This is the message we are sending to The Hague, Brussels, Strasbourg, Berlin, Paris and beyond. 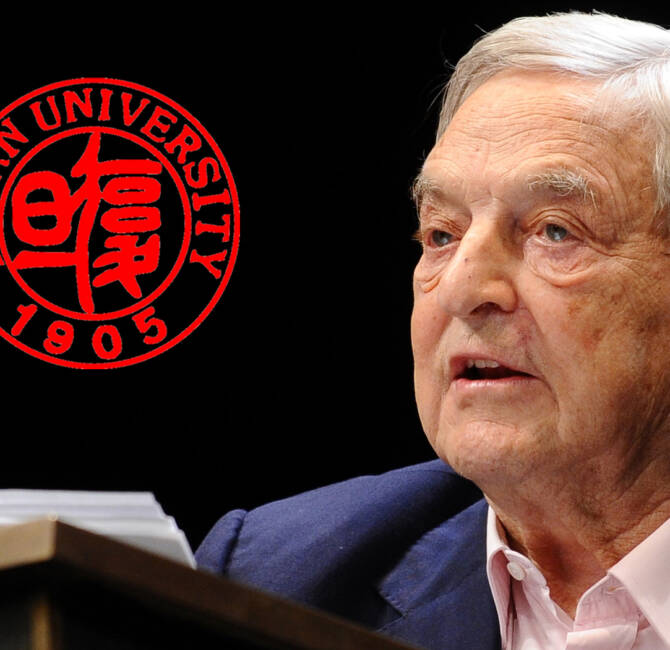 Soros not afraid of Fudan either