Slovakia – The Visegrád countries have held their planned summit despite press reports that the event would be postponed or even cancelled. Things actually seem to have gone smoothly, and there was plenty of agreement among the four Central European countries.

The week before, the speakers of Czechia’s Chamber of Deputies and Senate, Markéta Pekarová Adamová (TOP 09) and Miloš Vystrčil (ODS), had decided to boycott a meeting with their V4 counterparts, which was to be held in Slovakia’s capital Bratislava. The parliamentary summit was therefore cancelled, but this did not prevent the four countries’ prime ministers from meeting as scheduled on Thursday, 24 November in Košice, also in Slovakia.

The two Czech speakers, who are central to the five-party coalition that has been in power in Prague for almost a year, strongly condemn what they see as an excessively conciliatory attitude on the part of the Orbán government towards the Kremlin since the beginning of the Russian aggression against Ukraine. They also reproach Budapest for its energy policy, which they describe as “non-collegial” vis-à-vis its European partners.

Miloš Vystrčil said to Seznam Zprávy: “Consider, for example, the fact that the Hungarians are negotiating bilaterally with Russia on the supply of certain energy commodities. This does not allow for a united stance by the EU countries, and thus for the promotion of our objectives in this energy crisis. ”

Markéta Pekarová went even further when explaining her decision to boycott the parliamentary meeting: “It is always the Hungarians who are the last to agree to a sanctions package, demanding concessions and threatening not to support further sanctions. Moreover, they are capable of using the issue of war internally against the EU. They are Russia’s Trojan horse and I feel it is important to send them a clear signal that this is unacceptable. ”

These are accusations to which the speaker of the Hungarian Parliament, László Kövér, a close ally to Viktor Orbán, responded on 17 November: “The four countries have succeeded over the past thirty years in overcoming their ideological differences and cooperating at the regional level to represent our common interests. The remarks of the Czech Parliament’s speakers towards us are unfair and disrespectful. They do not match the facts and they question the Hungarian government’s right to pursue the country’s national interests. ”

… a show of agreement

But despite some disharmony among the Visegrád Four due to Hungary’s divergent attitude towards the war in Ukraine, the heads of government of the Visegrád Group did meet again on 24 November, for a new summit in Košice, in the east of Slovakia, the country which currently holds the group’s rotating presidency until July 2023.

On this occasion, Hungarian Prime Minister Viktor Orbán recalled that the V4 countries’ cooperation is a 30-year success story, which came into being because these countries were convinced that they had common interests and many common positions. He also pointed out that there is – in relation to the Russian–Ukrainian conflict – an agreement on strategic objectives within the V4.

His Polish counterpart, Mateusz Morawiecki – whose country is spearheading European support for Ukraine against Russia – summed up the context of this summit in the following way on his official Facebook profile: “The Visegrád Group has firmly established itself in the European security architecture. Some have recently looked at us only through the prism of what makes us differ.

We, on the other hand, have met face to face to talk about what unites us, because the V4 is a very important forum for cooperation in many areas.

Today we focused on the topics of energy and military security. We discussed all the most important issues – with very positive conclusions for the region.

Our position is clear. The war in Ukraine must end, with full respect for its independence and borders.

We have also reached agreement on the accession of Finland and Sweden to NATO. There is a concrete date. Prime Minister Viktor Orbán has given his assurance that Hungary will ratify their accession at the beginning of the year, for which I thank him very much.

The high price for gas is paid by all citizens of Poland, Slovakia, Czechia and Hungary. We call on the European Commission to react decisively. The maximum gas price currently proposed is far too high. The Visegrád Group, together with Spain and Greece, are calling for it to be lowered.

Another thing is the European Trading System, which in our opinion should be frozen for at least two years at a level of €20–30 per tonne of CO2.

The aid we give to Ukraine as NATO’s eastern flank countries will continue to flow. We must also ask Western Europe and the rest of the EU not to lose their vigilance. The coming months could be very difficult, and we are appealing to the European Commission to increase funding and humanitarian aid for Ukrainian refugees.

The cooperation of the Visegrád Group sets an example for the rest of Europe. Remembering that we are different, we are able to come to common solutions that are good for all.”

Czech Prime Minister Petr Fiala explained that he was convinced that the V4’s cooperation made sense and had a future, and that it would continue at ministerial level. About the Košice summit, he said:

“We were able to have an open dialogue on issues where we have different positions.”

He added that this was happening while respecting those positions, with a consensus emerging on many substantive issues concerning Ukraine, including on the need to preserve Ukraine’s territorial integrity and to assist it militarily and financially in its fight against Russian aggression.

Finally, Slovak Prime Minister Eduard Heger, who was hosting the summit, asked for help from his counterparts in dealing with the impending health crisis in Slovakia, where his government has not been able to reach a final agreement with the doctors’ unions on salary increases, a situation which has led to the resignation of more than two thousand doctors.

Referring in passing to the reaction to Viktor Orbán’s supporter’s scarf at a recent football match – a scarf with a map of Hungary in its pre-1920 borders, a motif that is ubiquitous in Hungary – Eduard Heger took a diplomatic tone, saying: “I noticed that Viktor Orbán had an old scarf, so I gave him a new one today.” To which Viktor Orbán replied “Hungarian and Slovak, two good friends!” (Magyar-szlovák két jó barát!) before posing with his Slovakian counterpart under the new scarf. 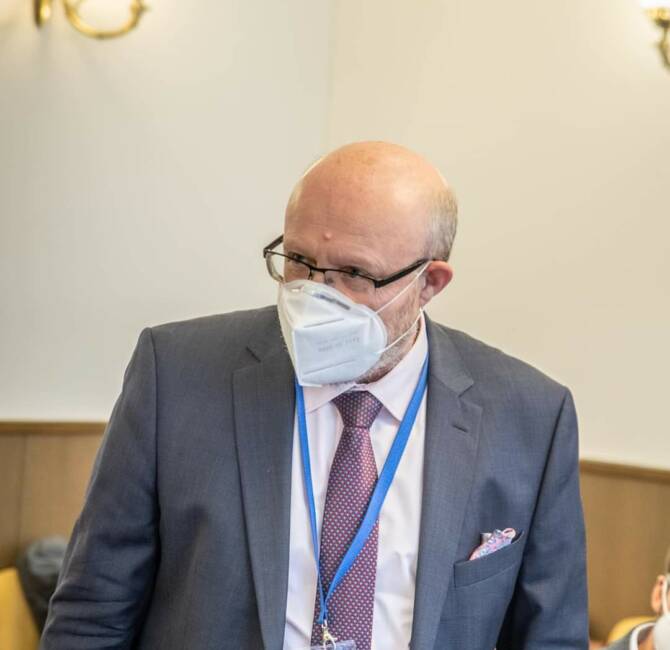 Immediate protection and no formalities for Ukrainian refugees in the EU