Austria – Interview with Norbert G. Hofer, member of the FPÖ, the Austrian national-liberal party: “The FPÖ will probably be the first party at the next elections […] If we manage to govern, there will also be a very close contact with the states of Visegrád.” The outgoing candidate in the second round of the Austrian presidential elections in 2016, Norbert Hofer, received the Visegrád Post in his office of the Austrian parliament.

We talked about the United States, Russia, China, energy, hyperloop, the Habsburg Empire and the Order of St. George.

Interview conducted in Vienna on 3 February 2017 by Ferenc Almássy.

Ferenc Almássy: The news prompts me to start with this question. Donald Trump is now President of the United States. If he implements what he has promised to do, and it seems to be well on its way, the United States should move towards more isolationism, but also possibly towards cooperation with Russia. What are the consequences for Europe, particularly Central Europe? And what do you hope, or do you fear, regarding Austria?

Norbert Hofer:  I do not think that the US will be isolated. But I believe that they will do everything they can in order to bring production back to America, because this is supposed to secure the jobs in the US. And I believe that Europe must react to it, because if Europe does not do everything in its power to become economically stronger again and remembers what the founding fathers – Charles de Gaulle, Adenauer – wanted this European Union, this European Community to become, namely economically strong cooperating states, so that they could work together for mutual understanding and avoid to lead war against each other.

FA: In this context of likely relaxation of tensions between the US and Russia, what do you think about the Ukrainian crisis? How do you see this conflict? Could Austria, as a neutral country outside NATO but a member of the EU and with relatively good relations with Russia, play a role in restoring peace in this country linking Russia and Central Europe – which includes Austria?

Norbert Hofer: Yes, that is the great advantage of our country that we are neutral. This has resulted from the history of our country. We are fortunate to be neutral and that is an advantage for Europe if there is such a country in it and we could be ground for peace talks and I believe that this would work very well for us.

I would have liked to organize these peace talks if I had become President. I hope that when I will be President in a few years, this conflict will be solved already. Then there will be other conflicts in the world…

This tradition in Austria has started with a Federal Chancellor who is still known to many Austrians, namely Bruno Kreisky. He has begun to invite the heads of states, including dictators, to Austria and try to talk here and that was a real way. So I think Austria has to do even more and this is a huge advantage for the European Union.

FA: Central Europe, even beyond the V4, lives a kind of renaissance, and seems to take control of its own fate. There is an ambitious project to develop a north-south energy axis from Croatia to Poland. What do you think about this project? What is at stake for Austria? Should she take part in this project?

Norbert Hofer: It is correct that because of the common history, it is much easier for Central Europe when it comes to cooperation. If you visit today the capitals of Central Europe and look at the old buildings, you’ll believe that a handful of architects has designed them all. Everything is very similar, but also the basic cultural idea is very similar: we are all strongly influenced by the values ​​of Christianity, even those who are not Christians, but the values ​​are still there.

And if you address the energy issue, I believe that Europe needs to cooperate more closely in certain areas, while in other areas, we might need to cooperate less closely than before. For example, I ask myself the question whether agricultural policy really needs to be a community issue? Member countries are likely to do this much better individually.

However, on security issues, economic issues and energy we need to cooperate more closely. It is therefore wise to find ways to make this cooperation possible, especially in the infrastructure, which means that in the future we’ll have to find ways that strongly rely on renewable energies, because we know, of course, that while fossil energy sources are now being used extensively, we’ll have to rely on other primary energy sources in the future.

And here, too, I see a great opportunity for Europe to be at the forefront. Thus, energy supply and energy infrastructure are important to us, because here too we cannot solely rely on the US to provide us with what we need, or that Russia will always provide us with this. Rather, we must try to rely on our own strength.

FA: Speaking of Central Europe, there is a new actor more and more present in the region, namely China. How do you see her regional involvement? What do you think of the Elbe-Oder-Danube canal and other infrastructure projects related to the New Silk Road?

Norbert Hofer: I believe that the Elbe-Oder-Danube Canal is an interesting project. But, as far as China is concerned, one thing is very important to me: close cooperation with China. I met the Ambassador of China. China is keen to invest in Europe, but we must also ensure that there will be no sell-out of Europe, because China is, of course, looking for values ​​that can be bought.

This is where we have to find the balance between welcoming China’s commitment on the one hand; and always weighing the advantages and disadvantages of projects to be implemented – it is not easy to find the right decision for big projects, but interesting projects have to be evaluated. But we must not allow any sell-out, which is the most important thing for me.

Nowadays it makes me very worried that wherever you go shopping – even when you shop at a big furniture chain that is actually located in Sweden – you only see products that come from China and I’m sorry about this because I would prefer to keep production here in Europe. Even, and gladly so, with the participation of Chinese investors in the framework of joint ventures. But the fact that we are producing less and less here in Europe is a mistake and this is why we must succeed in a turn-around.

FA: About infrastructure, have you heard of the hyperloop project linking Vienna, Bratislava and Budapest, but also Bratislava to Brno and Prague? What do you think of it?

Norbert Hofer: I’ve heard about this project, and I think it is very interesting, because it is precisely in this area where the connection [of the capitals] would be of great interest for the economy. I always say that we would also need similar projects in Austria. So I’m very excited about the impact [of this project].

FA: Let’s get back to Austria a little bit. After your rather tight defeat in the presidential election, what future for the FPÖ? How do you see the upcoming elections? If the FPÖ is leading, do you envisage the possibility of forming a coalition with other parties?

Norbert Hofer: I believe that the FPÖ will grow very very strongly during the next elections for Parliament [Ed.: 2018] and it is even likely that we will be the strongest party. If we enter into government’s responsibility, then of course only in coalition with another party[Ed.: because of the fully proportional system of vote, there has never been a single-party government in Austria, but coalition governments]. My experience is that in politics, after elections things often look quite different. I am firmly convinced that other parties will be open to talks with a winner because it will be quite clear: a coalition of losers is exactly what people will not want.

But the elections must be won first. One must not be snooty and believe that everything is already positively done. We also need to work very hard for this goal, we need to be very consistent in terms of our content, and if we succeed in governing, there will also be a very close contact with the Visegrád states, and much more understanding for the concerns of the Visegrád states, and no longer this unjustified criticism, which unfortunately has existed in recent years from Austria. Here, many things will change for the better.

FA: In the context of a reviving Central Europe, how do you see the role of the common heritage of the Austrian Empire?

Of course we have completely different times today. Nobody says that the monarchy is to be reactivated, but I strongly advocate this model that the countries of Central Europe again get closer to each other within the framework of a fruitful cooperation.

FA: You are known to be an honorary knight of the European Order of Saint George (an order of the house of Habsburg-Lorraine). In the recent past, the Order, being a rapidly growing instrument of a Christian political civil society, has repeatedly urged that the states of Central Europe move closer together in order to have a strong voice in the EU and to advance the urgently needed reform of the EU. What do you think of it?

This is why I am glad that the Order supports me and why I support my Order and am convinced that this Order will be an incredibly great network in some decades that can do very much for peace. Even now, the Order is already doing very much, but it is growing constantly, and I cannot imagine how great and influential this Order will be in ten or twenty years. 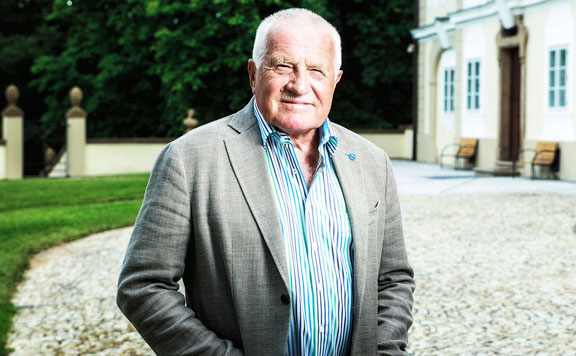 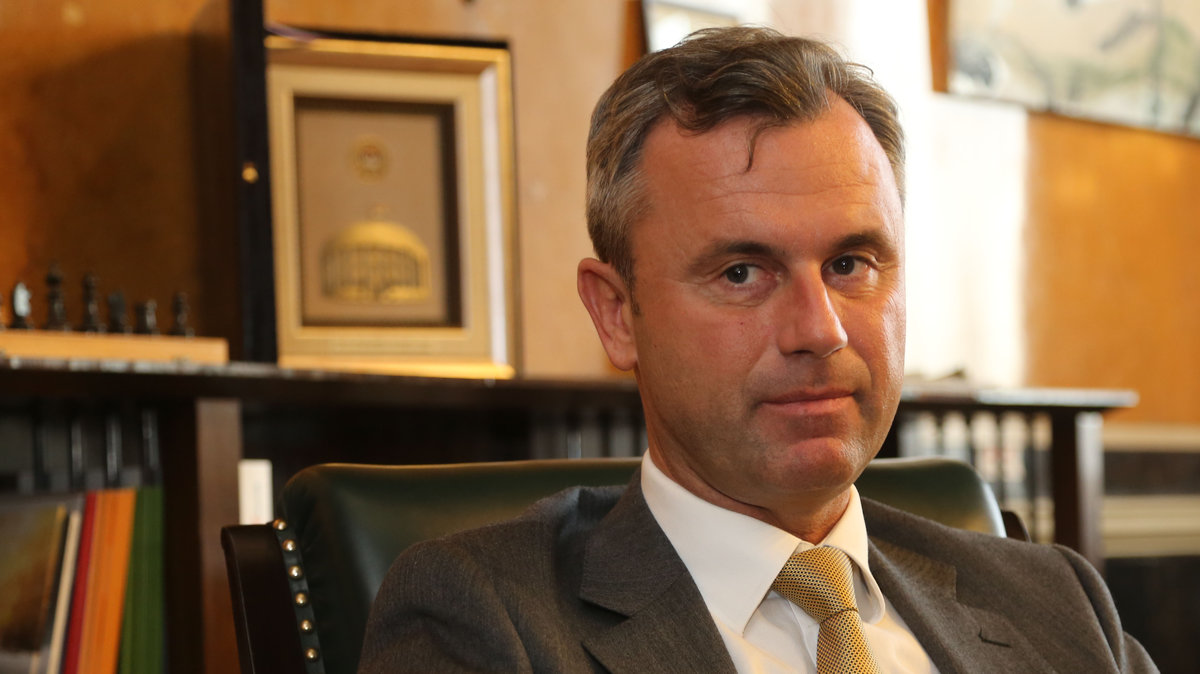 Norbert Hofer: it would be an advantage for Austria to join the Visegrad Group