Hungary – Three-fourths of voters are exposed to all political perspectives.

Médianéző Központ Kft. is a research company evaluating Hungarian and regional media and media policy, as part of the Nézőpont Institution Kft. group. This is a Hungarian think-tank established in 2006 aiming to “improve Hungarian public life and public discourse by providing real data, facts and opinions based on those” as described on their website.

The most recent study published by Médianéző Központ has determined that the Hungarian media market is balanced and approximately the same number of people are exposed to both conservative and liberal media sources. The evaluation provides an overall picture of the Hungarian press, revealing that the number of liberal press platforms has been consistently growing since 2010; in addition, the most significant Hungarian media companies, regardless of their relationship with the government, are successful.

Regardless of the political association or government connections of Hungarian media companies, any user can easily access all of them anywhere. The Hungarian population’s access in terms of technology is quite widespread, as outlined in the Médianéző Központ study: for 3.8 million homes there are 3.7 million television subscriptions; the number of internet subscriptions exceeds the country’s population; 91% of adults have a mobile phone and 73% of them can use the internet on it. According to the report, there is widespread access to various news portals in Hungary: 89.2% of adults over 18 watch TV, 75.4% use the internet, 50.7% listen to the radio, and 27.1% reads newspapers in print. Aside from this, 66.6% of the population has a Facebook account, constituting the nation’s most popular social media platform. Nearly three-fourths (specifically, 74%) of those questioned by the Kutatópont Műhely (another research branch of the Nézőpont Institution) read news through social media on a weekly basis; 47% of participants do so daily while for 16%, this is their primary source of information.

Médianéző Központ also investigated how politically balanced the media landscape is. 95% of the adult population of Hungary—that is, 7.7 million individuals— are regular consumers of media; trust in the press is in line with the EU average. The Hungarian media market is balanced: in terms of numbers, about the same amount of readers consumes conservative sources as left-wing sources; the former is at 84%, 6.8 million individuals, while the latter is 83%, 6.7 million. The amount of those informing themselves from both sides of spectrum is almost 6 million people, or in other words, about 75% of the voting population is guaranteed to know what’s going on both political camps.

The past decade has delivered a real turnaround in the Hungarian media landscape on both the right and the left. During the regime change, a number of well-funded foreign investors with media expertise appeared in Hungary; the German Axel-Springer and Bertelsmann along with the Swiss Ringier dominated Hungarian media for two decades. The study points out that, to this day, Hungary’s biggest daily tabloid, Blikk, is published by Axel-Springer. In 2014, Central Csoport –owned by the presumably left-wing, Hungarian billionaire, Zoltán Varga– bought stakes in Sanoma. The Centrál Médiacsoport Zrt. currently publishes 24.hu, one of the biggest liberal news portals with millions of readers; they also have a large stake in the political and economic magazine, HVG, which exists both online and in print. One of the major players in the Hungarian media landscape, Mediaworks Hungary Zrt., came under domestic ownership in 2014 as well; its portfolio consists of daily county-based newspapers, economic journals, fashion, lifestyle, and tabloid papers, as well as national dailies and online portals reporting on the public sphere such as Világgazdaság, Magyar Nemzet, and Mandiner. One of the most significant online portals, Origo.hu, also ended up in Hungarian hands in 2015 when New Wave Media Kft. bought it from Magyar Telekom, which is majority-owned by the German Deutsche Telekom. The Médianéző Központ evaluation highlights the substantial presence of foreign entities in Hungarian TV given that RTL Group owns and broadcasts RTL Klub– the country’s most watched news program– along with several other major cable channels. However, the Hungarian-owned TV2 Group operates the other dominant national channel TV2, serving as the main competitor of RTL Klub. The analysis shows that in the market of politically decisive media, in terms of the number of press products, 95% are currently Hungarian-owned.

One important feature of the pluralistic world of the Hungarian media is that, thanks to agreeable legal regulations, it’s easy and fast to establish media platforms; thus, new portals are consistently appearing on the Hungarian media landscape. According to Médianéző Központ, it is a notable phenomenon that ever since 2010, the amount of left-wing media sources is continuously growing; by 2020 their numbers increased from 33 to 48, constituting a 45% rate of expansion. The Hungarian regulations adopted in 2010 stipulate minimal and simple conditions to establish a media platform; essentially, all you have to do is declare your company in order to get started.

The majority of Hungary’s media companies—regardless of their relationship with the government—can be said to be profitable. The portfolios of these companies not only consist of political papers, but also often thematic and tabloid magazines; these can reach a wide consumer base with a stable operating system and frequently, these aforementioned companies also carry out book publishing and online services. Solely the Magyar Jeti Zrt. publisher of the left-wing 44.hu is incapable (now seemingly habitually) of establishing a sustainable business model; this really can’t be explained by the paper’s (hostile) relationship with the government, but rather simply by the poor business decisions brought by management.

The Médianéző Központ evaluation emphasizes that while Hungary’s constitution ensures freedom of press and expression, the Hungarian media takes full advantage of these freedoms, even to the detriment of individual or community rights. The media and its associated actors have a penchant for putting out content that violates human dignity along with the religious beliefs of communities, and even going as far as to call for violently overthrowing leaders. The left-wing Magyar Narancs weekly magazine portrayed Viktor Orbán with a Hitler-moustache on its cover; the daily, Népszava, featured a caricature of Jesus Christ; the new liberal online portal, Mérce, provided a platform for an opinion-piece calling for rebellion. The Médianéző Központ study notes that conservative media is partial to criticizing George Soros and his pursuits.

The media authorities of many EU Member States are subordinated to governments, often directly under ministries. Meanwhile, in Hungary the National Media and Infocommunications Authority and its Media Council not only has their own source of revenue, but also is only subject to the Parliament’s more than two-thirds cardinal law. This practice removes the media supervision institution from the executive branch, especially when compared to other Member States of the European Union.

According to the Médianéző Központ analysis on the decisions of the National Media and Infocommunications Authority and the Media Council, it is obvious that the Hungarian media authority more frequently and severely punishes conservative media than liberal. More than two thirds of the sanctions brought by the independent media authority between 2012 and 2020 applied to right-wing media while less than one third related to left-wing media. 66% of fines imposed, HUF 357 million, was paid by conservative platforms and only 34%, HUF 183 million, was paid by liberal media.

Public, transparent government information and updates are provided by Kormányinfó which is the weekly press conference after each cabinet meeting, jointly held by the Minister of the Prime Minister’s Office and the Government spokesperson. During this regular press briefing, left-wing and right-wing media representatives alike can ask whatever questions they like. The Médianéző Központ study draws attention to the fact that it is a rare opportunity in most parliamentary systems for MPs to be able to ask the Prime Minister right after a cabinet meeting about whatever they want without having sent specific questions beforehand for approval.

Bias on both ends

Both internationally and throughout Europe constant criticism reaches the political bias of public media. There are two types of public media operating from tax money in Hungary: public media and local government press. Médianéző Központ highlights that though most attention is usually directed at the former (public media), since the 2019 elections, the capital and most of its districts (along with 10 out of 23 major Hungarian cities) have come under political opposition control. This change in leadership was typically accompanied by an editor-in-chief replacement and inherently, the opposition-led cities’ tax money is now directed towards financing local press that represents the values and messages prioritized by liberals. 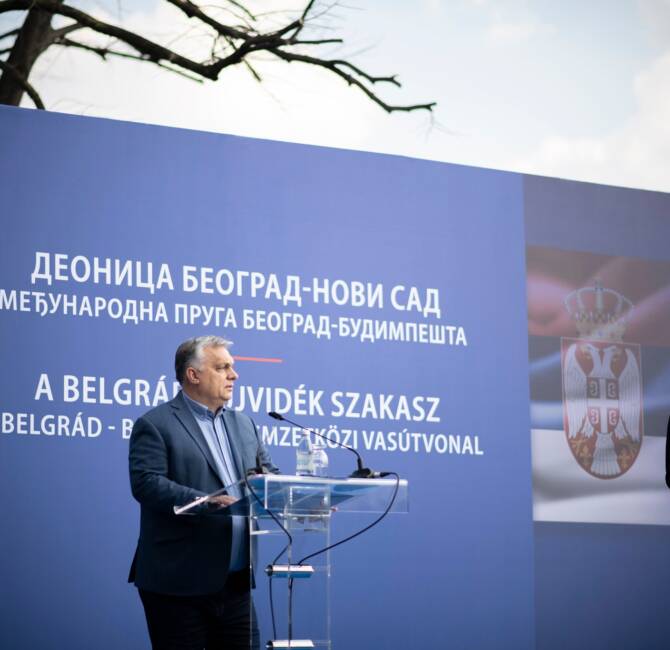