A crisis like this arises once every century. The complete extent of the damages caused by the coronavirus epidemic will only be clear later, with time. However, we can already witness the difficulties faced by people, the damaged economic sectors, and the families disparaged by the loss of relatives. And though a vaccination has appeared on the horizon, our problems are far from over. Europeans have not yet seen the ray of hope they are anticipating. It is up to the European Union—and its strength, struggle for solidarity, and competence of Member States—to ensure that the people of Europe regain their faith in the future.

The Covid-19 Pandemic is the biggest crisis since World War II. For the first time since 1989, we have the chance to respond to the challenges of this crisis together—as an independent, united Europe. This is an incredible opportunity. At the same time, the question persists: can we rise to this historic challenge? I believe that historians will document this moment as Europe’s great test.

But at this crucial moment necessitating mutual solidarity, a strong sense of division has emerged in Europe. It’s as if the enormous effort behind the recovery fund is doomed to destruction for the reasons that have always been the weak point of our continent: a tendency to argue and seek what separates us, rather than what unites. The method by which they want to connect the rule of law expectations and budgetary conditionalities, not only raises serious concerns regarding the legal basis of this mechanism, but also undermines the foundations of trust and loyal cooperation between Member States and EU institutions. The current measures which circumvent the founding treaties cause enormous legal uncertainty. Is this the kind of solution we want to provide our citizens who are in the throes of an unprecedented pandemic situation? Uncertainty and political quarrels?

Currently, the EU’s grave problem and paradox is that, while it continuously emphasizes the virtue of diversity, it is unwilling to accept Europe’s legal and constitutional nuances rooted in tradition. Just as European nations differ from each other, this continent’s community is composed of differing models of democracy. The French V. Republic and Germany contrast—but this is to be expected given that the French system was created by the will of the French people and the German by Germans. Italians and Poles, Portuguese and Hungarians—they all have the right to differ from one another. The EU must strive for solidarity in diversity, because this is the only way its unity will be efficient and constructive.

We demand equality and respect for the founding treaties! The EU cannot undermine its own principles, nor can it change them according to the political wishes of individual member states. The EU budgetary law falls secondary to the principles of the core treaties; thus, budget-related stipulations cannot circumvent, replace or amend the law established in the treaties. In terms of the regulation at hand, the rule of law mechanism circumvents and “overwrites” the founding treaty—specifically, Article 7 TEU. It must be made clear: the planed mechanism which enables Member States to monitor individual governments’ compliance with the law, is in itself a circumvention of EU law and a thereby a threat to rule of law.

Within the EU, disputes and differences in opinion arise often, but there are mechanisms that have always led to resolutions. I am confident that we are capable of finding a solution that respects the contents and spirit of the core treaties. Another possibility, however, is that it is not in the interest of certain “actors” for the European Recovery Fund to be launched because they don’t want to put money in the common budget—the best benefits they reap from the unified Europe market.

Today, we all have a common goal ahead of us which should serve as our guide: rebuilding Europe’s economy.

This mechanism’s design opens the door to dangerous interpretations. It offers extensive power and recognition to actors without democratic legitimacy; especially to those who hold a significant “democratic deficit” in their domestic parliaments. This poses a serious threat to all Member States and the future of the entire Union. Those who consider themselves immune are unaware of how much arbitrariness this mechanism allows for.

Of course, it’s not difficult to imagine that a given EU political actor dislikes an economic or social reform introduced in a Member State. But it’s enough to label any reform as a rule of law breach in the media or an EU forum, and already the road to EU funds withdrawal begins. Is this really what we want? To accept such arbitrariness? The establishment of centrifugal forces that this regulation would generate?

Such a solution would most likely allow for extreme political pressure on the domestic policy of Member States. I emphasize that we are talking about domestic politics here.

Presently, this arbitrary and politically motivated mechanism is directed against Poland, but where is the guarantee that tomorrow it will not be directed against another state unwilling to submit to the political will of Brussels? The founding treaties respect and protect sovereignty while this new mechanism violates and severely limits it. Lack of consent, i.e. the veto, will not lead to a weaker EU. This process is rooted in the reality of EU structures, in line with the spirit and democratic nature of this community. It’s the safety valve essential for the EU to even exist. A method to preserve compromise and prevent stronger powers from forcing their ways on us. It’s an affirmation that every Member’s voice is equally important.

Charles de Gaulle once said, “We sacrifice the future in the name of the present just because we are unable to say no.” Poland feels a shared responsibility for the future of Europe. That is why our “no” vote on this proposed mechanism is simultaneously a “yes” for a truly free, equal Europe unified in its diversity.

In terms of the regulation at hand, the rule of law mechanism circumvents and “overwrites” the founding treaty—specifically, Article 7 TEU. It must be made clear: the planed mechanism which enables Member States to monitor individual governments’ compliance with the law, is in itself a circumvention of EU law and a thereby a threat to rule of law. 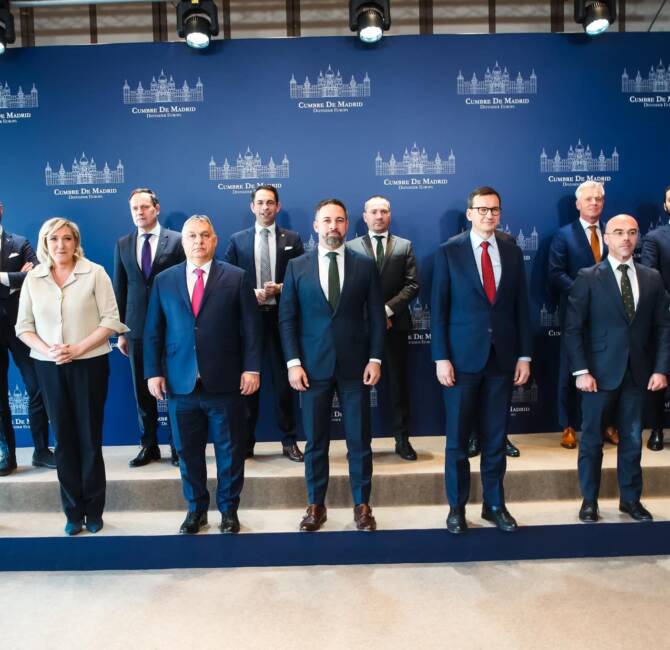