Bence Bauer is a lawyer by training. He lived in Germany for more than twenty years before becoming the deputy head of the Konrad Adenauer Foundation in Budapest. Today, he heads the German-Hungarian Institute at the Mathias Corvinus Collegium, a higher education college close to the Hungarian government.

Yann Caspar interviewed him in Budapest on 6 October to discuss the outcome of the 26 September elections in Germany and the new prospects for Hungary and Central Europe.

Yann Caspar: You recently wrote that German politics has entered a rainbow phase, or, as according to some, Weimarization. What exactly do you mean by Weimarization?

Bence Bauer: The 20th German Federal Parliament was elected at the end of September, which includes representatives from eight different parties. This is an entirely new formation which has no precedent in Germany’s history. The reason may be that the political system is so fragmented, with many parties and interest groups active in the public sphere; the new government is expected to form a tripartite coalition. This is new as well, considering that up until now Germany has only had two-party coalitions; in fact, on one occasion the CDU/CSU had an absolute majority. I wrote about “Weimarization” because what’s happening now in Germany is comparable to the Weimar Republic: there are many different, small parties, and it is very difficult to form a governing coalition. The Bundestag has never had the number of members it does today, and this could be because of the unique nature of German electoral law.

Yann Caspar: Four years ago, it took Angela Merkel six months to form a government. What do you think of the current situation? At what stage do the negotiations stand?

Bence Bauer: After extensive coalition talks, Angela Merkel was only able to form her government on March 14, 2018. First, the CDU attempted the so-called Jamaica coalition, which consisted of the Greens and the liberal FDP – however, this effort was unsuccessful. Apparently, this formation may have a chance again, but their prospects are not very realistic as the CDU did not win first place; the SPD has the most seats. The SPD also initiated talks with the Greens and the FDP; this would be the so-called Traffic Light Coalition.

Yann Caspar: Let’s address German-Hungarian relations. The Hungarian opposition welcomed the SPD’s success. However, many claim that the difference between Olaf Scholz and Angela Merkel is negligible. Do you believe this is the case?

Bence Bauer: Naturally, there are political differences between Angela Merkel and Olaf Scholz; however, they are two rather like-minded people in terms of habits, actions, and policy. Armin Laschet, the Christian Democrats’ candidate, appeared to be an indecisive, insecure politician during his campaign, while Scholz was confident, credible, and calm. It is apparent that many Germans like this. Another benefit with Scholz: because he was a member of the former government, he represents a change in personnel, but also a sort of political continuity. And this was probably an important point of consideration for many German voters.

Bence Bauer: It is very important in international politics and diplomacy to know and understand the countries we work with. We must understand the locals’ mentality, thought processes, and their history. From this perspective, Angela Merkel’s so-called equal-footing politics were optimal for Central European and German cooperation. Because Germany understood how we think in this region, their relations with the Visegrád countries were that much more cohesive. The CDU employed this approach often. A CDU Chancellor with CDU European politics and CDU foreign policy was always positive for a Visegrád country. If the CDU is pushed out of power – which is a possibility – then the politics of understanding, partnership, and cooperation could also come to an end. This would be particularly true if the Greens get a large role in the next government, since the efforts toward a more federalist EU would be stronger. I think the worst scenario would be if a leftist majority government were formed which would start to intensely “criticize” Hungary, potentially influencing the upcoming elections. However, looking at the current state of affairs – in the extreme, but not so inconceivable case –it could be that there is still no German government when the Hungarian elections come around.

Yann Caspar: Many believe that the EU has not taken stronger action against the Hungarian government because of the German auto industry in Hungary and other economic interests. Meanwhile, the Hungarian opposition welcomed the SPD’s win. If Olaf Scholtz were the chancellor, I don’t think there would be any huge changes. What do you think?

Bence Bauer: I see things similarly. I don’t think it’s in the interest of the opposition for Hungary to have worse economic relations with Germany. If Olaf Scholz becomes chancellor, I think that stability and reliability will continue to characterize their economic cooperation. These two countries and peoples have a good relationship not only in terms of economics but also culture, academia, and incidentally in national politics, since the German-speaking minority in Hungary is significant. The millennial relationship between two such countries must be stable enough to withstand even a more frigid period.

Yann Caspar: As far as I know – and this may be a shock to some – in certain cases, the SPD can be much more Russia-friendly than the CDU. The Greens, however, actively opposed the Nord Stream plan. Is there a chance that there will be strong anti-Russia voices in the next government?

Bence Bauer: The issue of the Nord Stream has divided German domestic politics as well for years. This is also related to the fact that former German Chancellor Gerhard Schröder is a member of Gazprom’s advisory board. Germany has actually always sought fair, pragmatic cooperation with Russia under all its governments, especially in connection with economic relations. Nevertheless, Germany is also divided on the issue – criticism of the pipeline is coming primarily from the Greens’ activist wing, as well as certain CDU politicians. At the same time, the colder it gets, and the more pragmatism and realism prevail, the less I see serious problems with the pipeline.

Yann Caspar: What is Olaf Scholz’s position on this issue?

Bence Bauer: Olaf Scholz believes in realpolitik, therefore he won’t spark a revolution nor dismiss negotiations. There may be a change in emphasis, especially on the part of the Greens, but I wouldn’t count on big changes, even if the SDU candidate becomes chancellor.

Yann Caspar: Yet you recently wrote that German society has shifted to the left in recent years.

Bence Bauer: Yes, this is true: German society has shifted to the left. This is obvious in both public and academic debates. However, German society is still very grounded, and there are very few extremists. I think the majority of German people want to have security as well as a predictable future for their children. Of course, there is always a small minority who want something else – but the question is, can this minority force their beliefs onto the rest? It seems in Germany that the minorities are pushing very strong propaganda – which is why a balanced stream of information regarding the Visegrád countries is all the more necessary, such as the Visegrád Post.

Yann Caspar: To briefly touch on the AfD: it weakened essentially everywhere – except Saxony and Thuringia, where they have become a decidedly strong party. How would you explain this?

Bence Bauer: If you take a look at the German electoral map, you will notice that Eastern Germany has become quite blue: the AfD won 16 individual constituencies, up from three successes four years ago. Germany has a proportional electoral system, i.e. the current results do not represent the national list average and the national representation of the party. The AfD was able to gain a lot of individual constituencies with the CDU weakening. I think the AfD is past its prime and doesn’t have much potential for growth anymore. There are more and more conflicts in the party, and their right-wing extremist faction is growing. They will hold a delegates’ meeting in the autumn and the party could even possibly split in two afterwards. This isn’t that uncommon, especially among right-wing populist parties. This is also what happened with the Austrian FPÖ in Jörg Haider’s time.

Yann Caspar: A poll was recently published which revealed that Germans feel that their freedom has deteriorated over the past year and a half because of the health restrictions. As far as I know, the FDP was critical of the handling of this issue. I would say that they are liberals in the classic sense of the word, not as activists, and they got good election results. What do you think of this issue?

Bence Bauer: It’s important to clarify a few things from the beginning in order to better understand the situation. Many label the FDP as liberal, but classical-liberal is a more fitting label, as they clearly identify themselves as right-wing. What we have witnessed in Hungary from the government in reaction to the coronavirus – an emphasis on vaccination and ensuring a viable economy – is the same position the FDP took on the issue. And with this reaction, they were able to create a distinctive profile which was especially popular among young people. Among the age group voting now for the first time, the FDP finished in first place, beating out even the Greens. This shows that the German youth are very mindful and have had enough of the German government reacting to the pandemic only with lockdowns. When the virus first appeared, there was no other solution but to lock down; now that we have a vaccine, however, we can’t keep doing this. This very sober thought was articulated by the FDP – in fact, it was the only German party to do so – because the rest are all very pro-lockdown, especially the Greens. 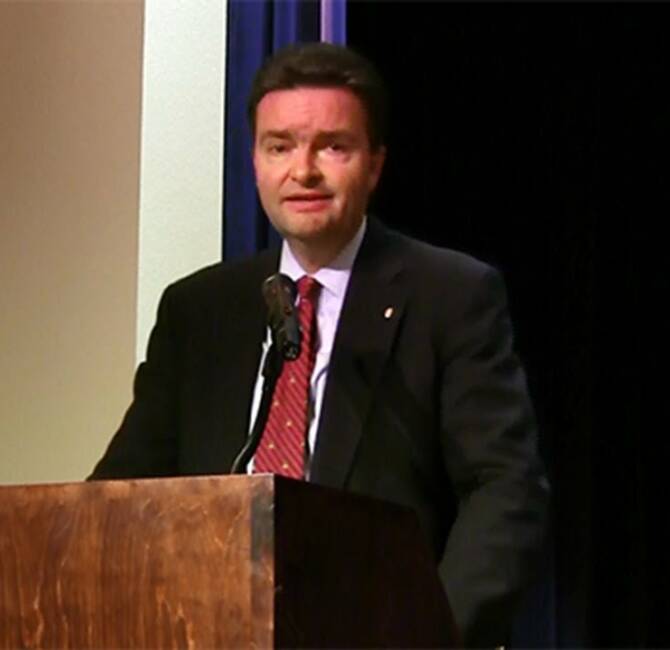 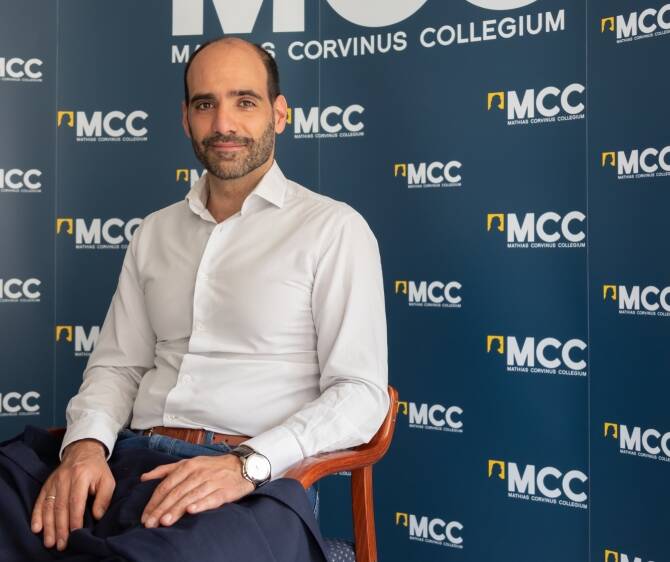 Rodrigo Ballester: “The MCC is the opposite of Cancel Culture that is wreaking havoc in the West.”