This article was published online by the Magyar Nemzet on 11 February 2022.

“Brussels aims to incapacitate the Hungarian and Polish governments.”

Ryszard Legutko, Co-chairman of the European Conservatives and Reformists (ECR) EP party family, is skeptical of next week’s ruling from the European Court of Justice. The Polish politician of the governing party openly told Magyar Nemzet that Warsaw’s room for maneuver is limited with Brussels’ threats of fund-withdrawals. He pointed out that this all proves the conservative governments have become a direct target.

You recently asked EP President Roberta Metsola to take action against the defamatory leaflets being distributed in the European Parliament against Viktor Orbán and Jaroslaw Kaczynski. Have you received an answer yet?

No, but I am still waiting for it. We have a new EP president so this was reason enough to write the letter: perhaps Roberta Metsola will take advantage of the opportunity to put an end to these kinds of things in our institution. The defamation of Viktor Orbán and Jaroslaw Kaczynski is nothing more than political hooliganism. The biggest problem I see though is that the EP’s left majority thinks they can do whatever they want. Can you imagine what would happen if I did something like this in the EP? I would probably have been sanctioned already.

This is your third term as Member of the European Parliament; have you not become accustomed to these kinds of campaign efforts?

Things have gotten worse over the years. It is in the interest of the majority left for the Hungarian and Polish administrations to cease to exist in their current forms. And I am not just talking about in the EP.

I have clearly told Ursula von der Leyen, to her face, that the European Commission is also working to influence democratically elected European governments.

They have a wide range of tools: from political attacks to personal insults. Meanwhile, the EP is working on its umpteenth resolution on Hungarian or Polish issues. We will debate the Pegasus affair as well. Have no doubts: despite the fact that there is no evidence at all against the Budapest and Warsaw governments, the debate will entirely be focused on us. In truth, rules have been let go and they have no boundaries. It makes one sick to see this.

What did President Von der Leyen say to your statement?

She would never admit that I am right, so she started talking about the role of the ECJ. Another example: the EPP will send a delegation to Poland. The Spanish representative in charge of the group, Esteban González Pons, carelessly, and publicly stated that their mission is to help change the Polish government. It is appalling.

There is less than a week left until the ECJ ruling on the rule of law. According to the latest reports, the EP will debate the ruling within hours.

It is laughable, right? They could at least wait for a written justification. This also shows that the left is confident that the courts will uphold the decree. For the record, I myself am sure of this as well.

I have had no expectations of professionalism from the Luxembourg courts for a while now. It does the same as the Commission and Parliament: it tries to circumvent the basic treaties.

If they declare the legality of the rule of law regulation, it will be possible to sanction certain countries and restrict EU funding. Meanwhile the Hungarian and Polish recovery plans are awaiting approval. This week we also saw the European Commission indicate that it would withdraw 15 million euros from EU funds for Poland – despite coming to an agreement with the Czechs on the Turów mine. How much room for maneuver does Warsaw have?

Less and less. But this only proves what I have been saying all along: they are consciously trying to incapacitate our governments. But there is another side to the coin: more and more people across the continent are realizing that the true face of the EU can be very ugly indeed as our sovereignty is taken away. Thirty years after communism we are again faced with the question: are we losing sovereignty? For have no doubt, Eastern countries will suffer from these efforts – not Germany or France. The currently ongoing conference on the future of the EU is also working to essentially replace consensual decision-making with a qualified majority.

They have no problem ignoring rulings from Member States’ constitutional courts as we saw. Yet in the beginning of this tighter cooperation there was no mention of Member States’ completely losing their sovereignty.

This process favors large countries as they provide the EU institutions with power. If the Germans and French suddenly withdrew support from the European Commission, it would not be able to function. The struggle for power also has an ideological side: in their eyes, Eastern countries are not progressive enough. They look to the past too often, and even dare to elect conservative governments.

The French president recently said in Strasbourg a few weeks ago that we must be careful with the rule of law mechanisms as we cannot allow for more Member States to become disillusioned with the European project.

Occasionally you do hear reassuring words – but this does not change the fact that the machine is constantly devouring. They are coming at us like bulldozers. The ECJ’s ruling next week is more significant than what President Macron says at the plenary. This process would only be slowed if we had more power in our hands. But as of now, I think the European conservatives are still too weak. We are in need of a minority capable of blocking – but of course we do not want to force our views on others. I am warily hopeful that this will change in 2024, after the European Parliamentary elections. A little over half of Western Europeans are dissatisfied with EU policies. There are certain countries where 30 to 40 percent are decidedly critical. If they had representation, we could make a change. But I cannot predict the future and I do not want to try.

Elections will be held in Poland next year. Are you expecting foreign manipulation?

Of course. Just as those in Brussels did not forget that the Hungarian elections will be this April. 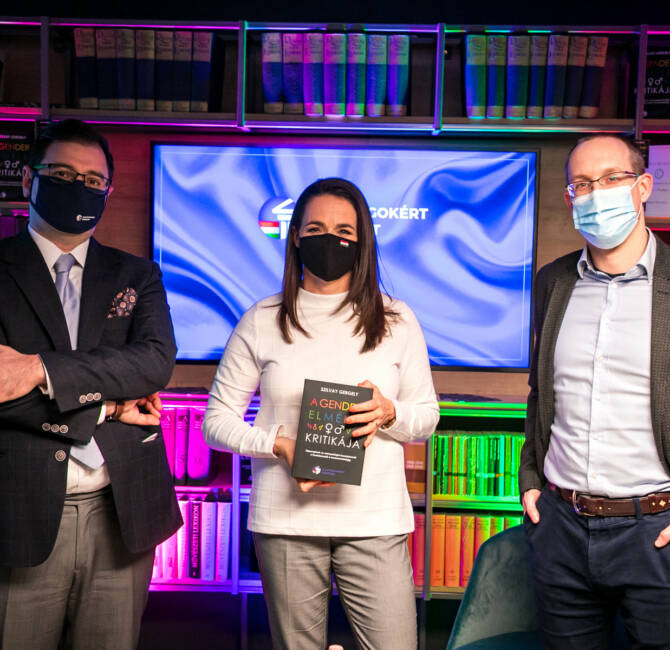 Gergely Szilvay: We’re in need of an anthropological counter revolution