Poland, Warsaw – On November 11, 2017, tens of thousands of people marched in Warsaw during the Independence march, organized annually by a nationalist association, and which had as slogan for this year “We want God”. The liberal left-wing opposition in the Warsaw City Hall has tried to launch a “fake news” about the event, and the international press has attacked the march, the Polish government, and sometimes even the entire country. But what one can see emerging today is a strong identity dynamic in Poland, going hand in hand with an increase in the political and diplomatic weight of the country. By Ferenc Almássy, in Warsaw.

On November 11, the Poles celebrate the recovery of their independent state, their national territory having been previously divided between Prussians, Russians and Austrians.

According to the organizers of the event, 125,000 patriots were present during the march of Independence (Marsz niepodległości) this Saturday, November 11, in the Polish capital, making this year’s march, organized every year since 2009, one of the greatest successes in terms of participants. From soccer fans to families with strollers, to students and veterans of the Second World War, the whole Polish society seemed represented in this trans-currents patriotic march. According to the police, the number of participants was around 60,000. Three counter-demonstrators were seen along the route. 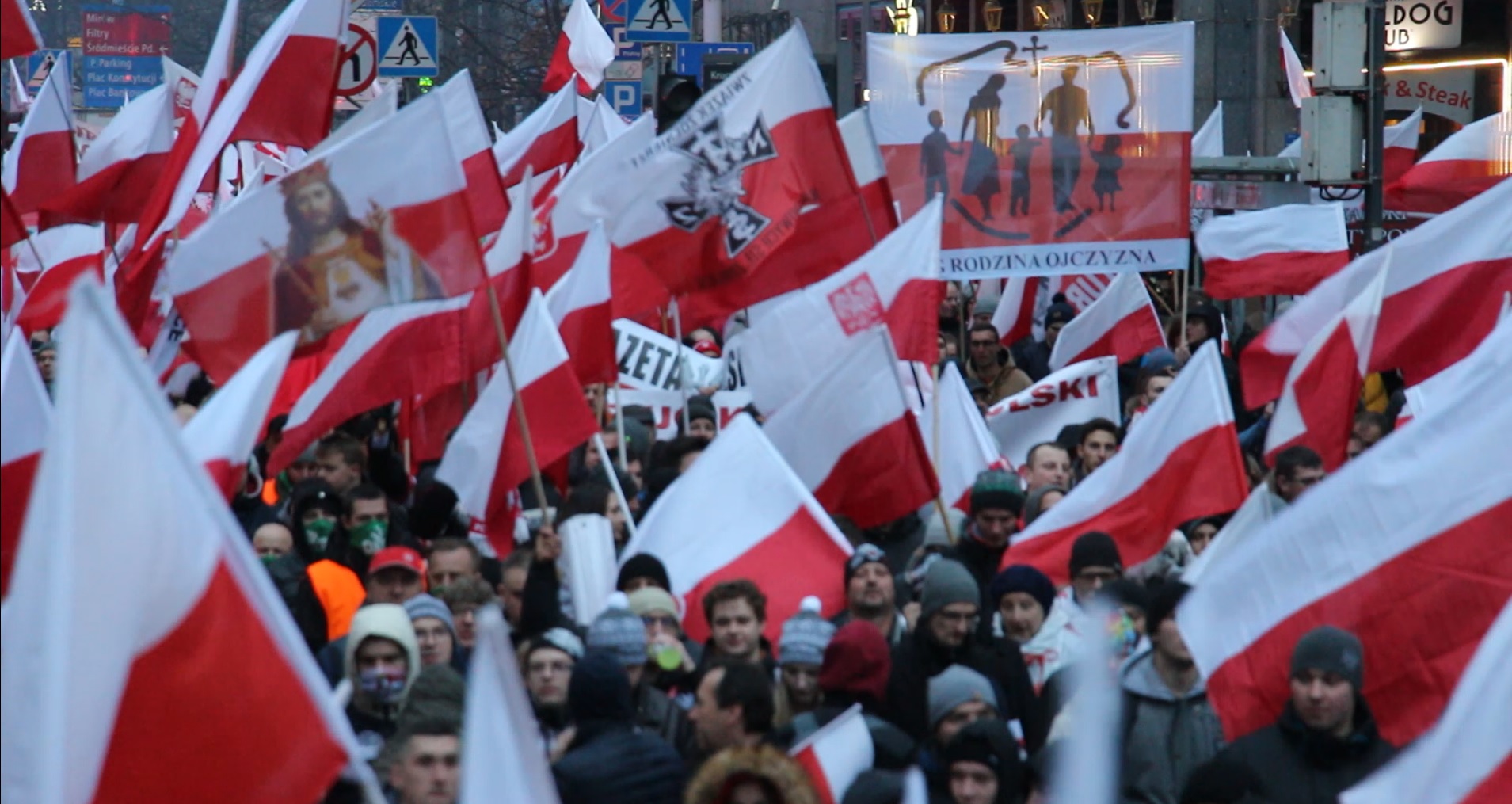 The Warsaw City Hall, in the hands of the opposition party PO, however, tries to make people believe that only 30,000 participants marched on the main avenue of Poland. In May 2016, protesters from the liberal opposition, including the PO, marched to protest against the government. The leftist procession had taken an hour to pass fully a given point on the street of Nowy Świat, and according to the Polish left, the participants were 240,000. Saturday, to pass a given point, the procession of Marsz niepodległości took 50 minutes, on an avenue – Aleje Jerozolimskie – four times wider …

If the figure of 30,000 advanced by the opposition has not been taken into consideration – the mainstream media using the figure of 60,000 estimated by the police – the qualifiers used are part of a terrible bias against Poland and its conservative governance. CNN propagates that the nationalists have caused trouble and fear in the streets of the capital. Other very biased and anti-conservative media have described the absurd and grotesquely qualifying as “fascist” all the participants … 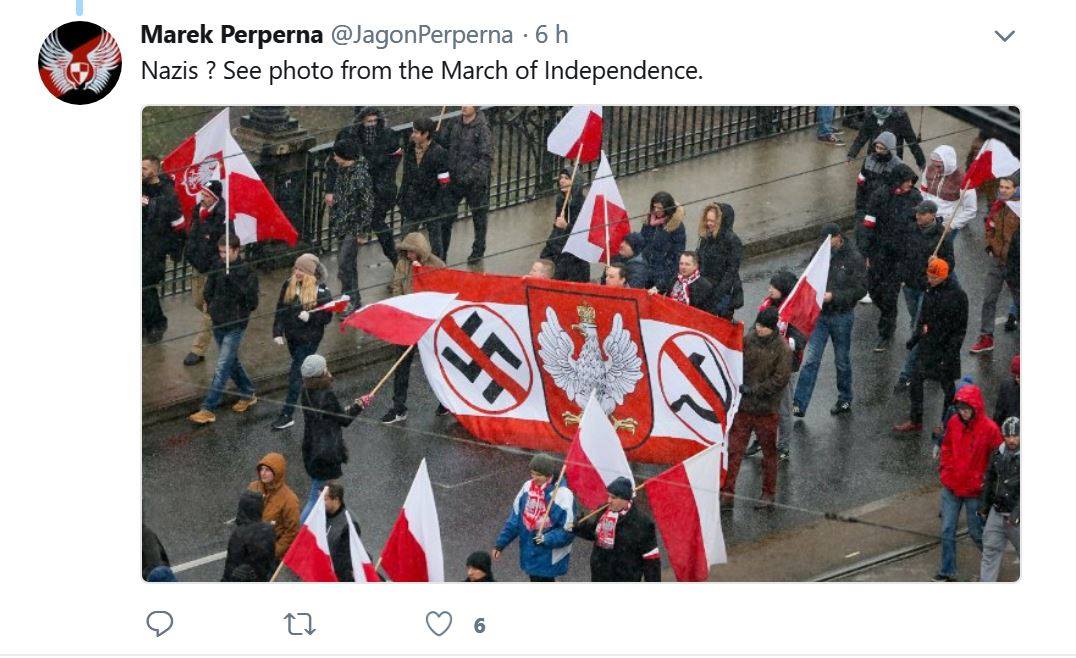 Beyond ignorance, prejudices and hatred

… even though the slogans launched by the organizators denounced fascism, Nazism and communism against which the Polish nationalists fought, literally. Poland has indeed been at war with National Socialist Germany and the Soviet Union. The first one broke Poland and annihilated Warsaw, and the second occupied and oppressed the country for 45 years.

These accusing, insulting articles, which ignore the journalist’s ethics, prove the political agenda of a certain transnational milieu aiming at destroying any element opposing their views, but even more are to be seen as the proof of their fear in front of a strong identity consciousness. The use of shortcuts by people who do not know anything about Poland, Central Europe or even Europe, show the hateful face and the lack of ethics of a caste holding the keys of the main newsrooms of world media from CNN all the way to Al Jazeerah, and via the Daily News. Hillary Clinton’s former advisor, Jesse Lehrich, is representative of a hateful international liberal caste that is eager to stigmatize its political opponents. According to the North American expert, the Poles who took part in this march were “Nazis”.

Of course, a number of extremists also took part in the march, but despite the denunciation of their calls for violence by the government and by the organizers, many media generalized their ideological attack to all participants, or even to all Poles.

The main organizer of the march, Robert Bąkiewicz, told us that their nationalist association hoped to have a role on the political scene. In 2015, after the PiS won the presidency and the parliamentary elections, the troubles ceased on the march. “Since the PiS is in power, we realize that in fact the march is not at all violent,” said Piotr Gliński, Deputy Prime Minister and Minister of Culture and Heritage, a bit sarcastic. Indeed, despite the sorytelling of the globalists, there is since 2015 no violence during the march …

For Robert Bąkiewicz, the government’s attitude towards the march is appreciable, but his association intends to mobilize the youth in particular, which is demanding for even more patriotism “after the communist oppression and facing the dissolution of identities brought by the West.” According to Mr Bąkiewicz, the PiS government is not nationalist and its positions on the international scene are too close to what is expected by the United States or Brussels. They want to push the government to go further in defending the interests of Poland. 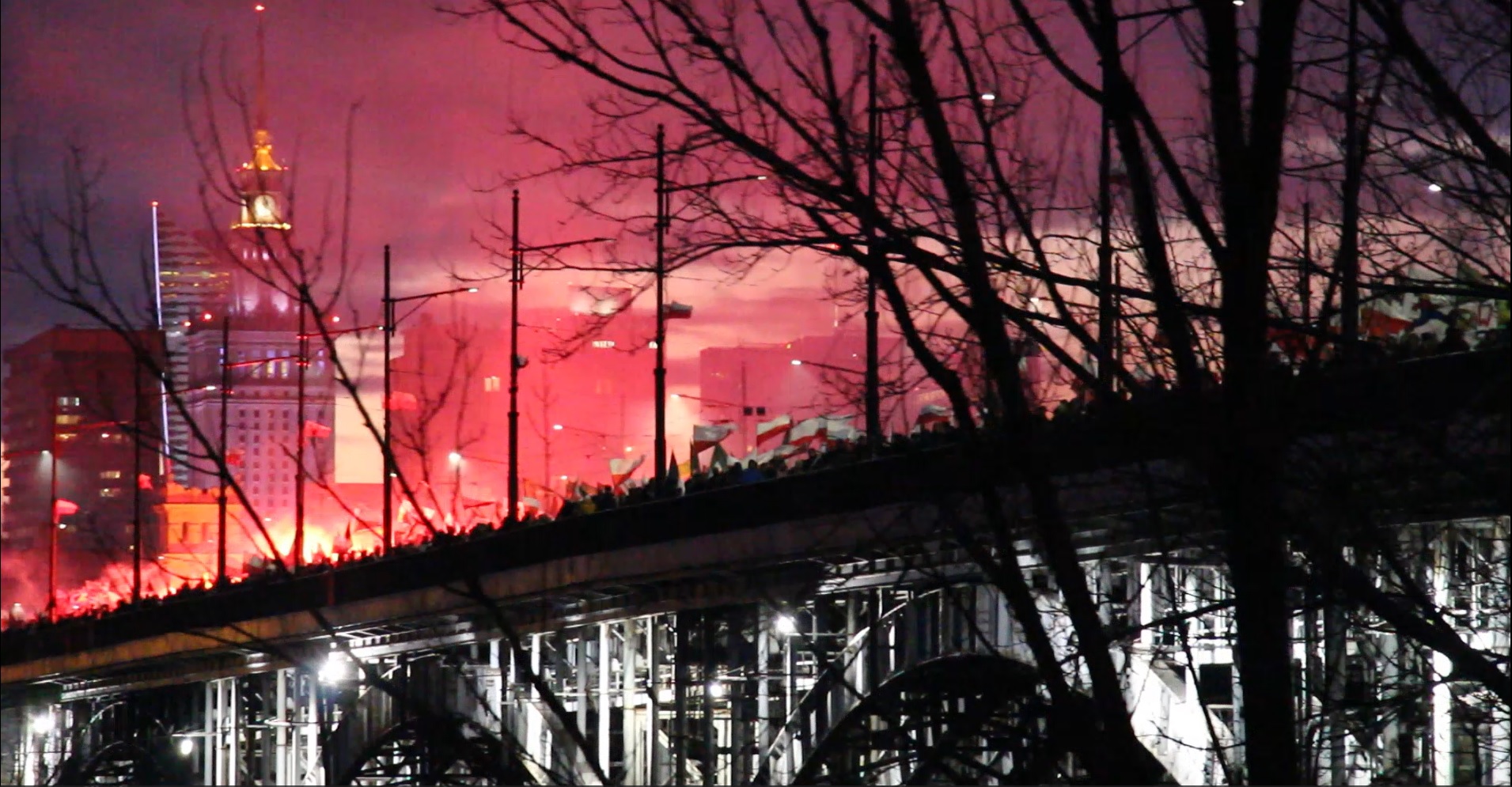 “Neither Moscow nor Brussels!” Was one of the slogans regularly yelled from the organizers’ trucks during the march. For the Polish nationalists, two dangers threaten Poland and Europe: liberalism – LGBT+ agenda, secularism, individualism … – and Islam, associated with mass immigration, especially since the massive, uncontrolled and chaotic arrival of migrants via the Balkan route in 2015, which has also led to an increase in the number of terrorist attacks in Europe.

For them, the solution lies in unity in the Christian faith, the foundation of European civilization. “We want God”, the slogan of this year’s march that one could hear during the demonstration, punctuated by Polish religious songs heard between the patriotic songs of the 1920s and nationalist rap, is quite explicit. It also refers to a Polish song used during communism. The message is clear: Polish nationalism wants to be identitarian and Catholic, anti-communism, anti-liberalism and anti-Islamization.

This nationalist avant-garde, expert in metapolitics, therefore tries to influence the conservative government of the PiS, already rich in many successes at a European and international level: the cultural counter-revolution announced by the gray eminence of the Polish power Jarosław Kaczyński advances to strides and a symbiosis seems to be emerging between the street held by the nationalists and the ballot boxes held by the Conservative government. The opposition is totally deconstructed, despite its overrepresentation in the national media and the massive and disproportionate support of Western media. At mid-term, the government of Beata Szydło went from 37.6% of votes in autumn 2015 to 47% of voting intentions today. What clearly invalidates the propaganda of a left which speaks about a country engulfed in a political crisis and a government in difficulty and in decline. The bigger it is, the better, one could respond to what turns out to be on the part of the opposition an admission of helplessness.

A country that regains self-confidence

All these indicators, the policy of the Polish government and the capacity of then marginalized nationalists during the rule of the previous center-left governments to reunite “Polish patriots” beyond the political orientations of people for a march which became the main Polish national event on the day of the Independence, show the political dynamics of a renewed self-confidence of the elites and people of Poland.

With the Visegrád Group as a springboard for a central European-European policy regarding issues related to national identities, Poland now ventures to assume what it actually is: the main power of Central and Eastern Europe, and a heavyweight of European politics. This country with a very strong identitarian consciousness — but which does not come from an ideology, since it has been shaped over the centuries by the almost permanent external aggressions — has all the cards in hand to meet its needs, its desires and to assert its civilizational expectations. 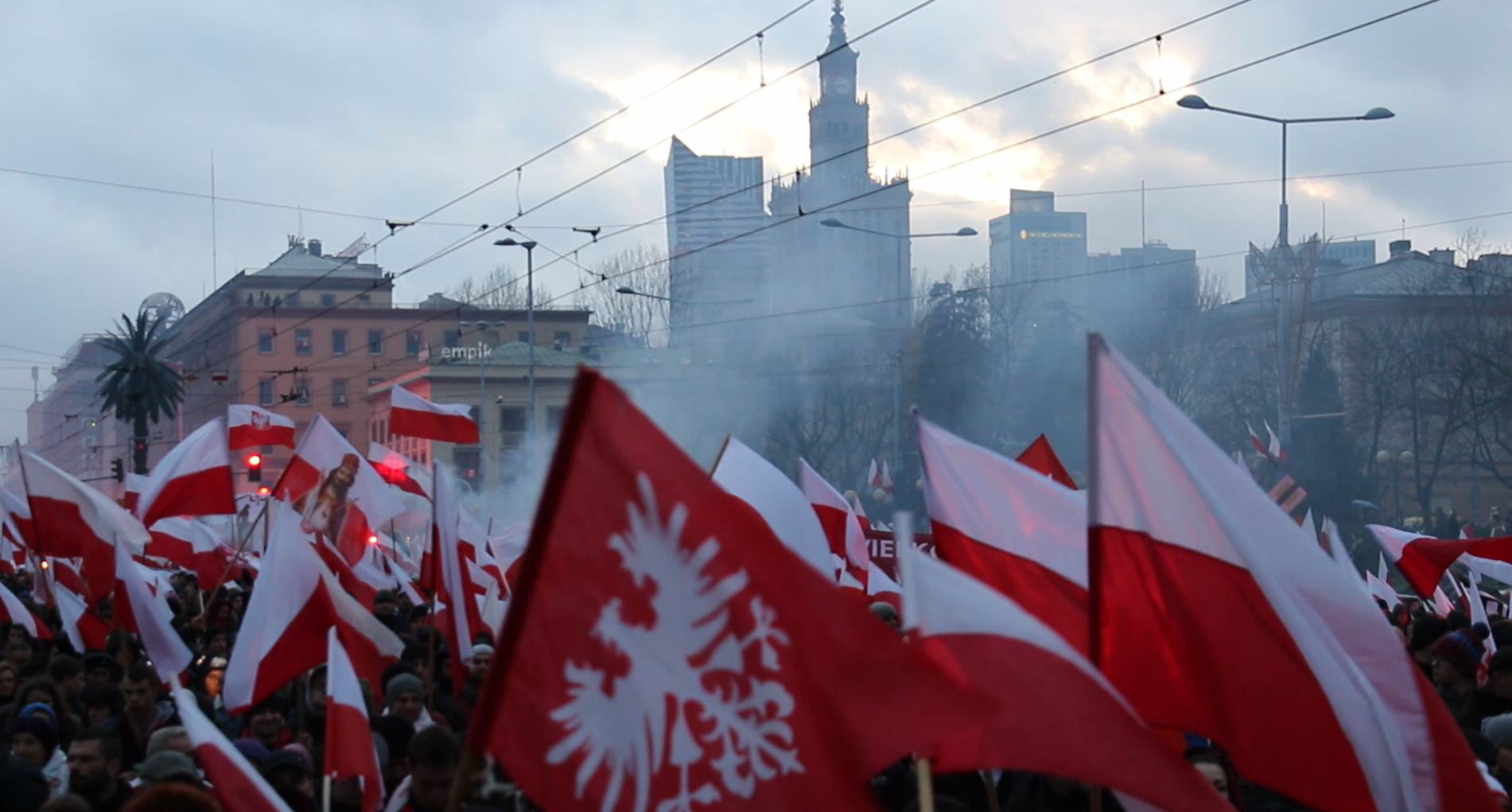 All the pictures have been made by the author. See the full album on our facebook page.
The use of the pictures is authorized is the source is quoted. 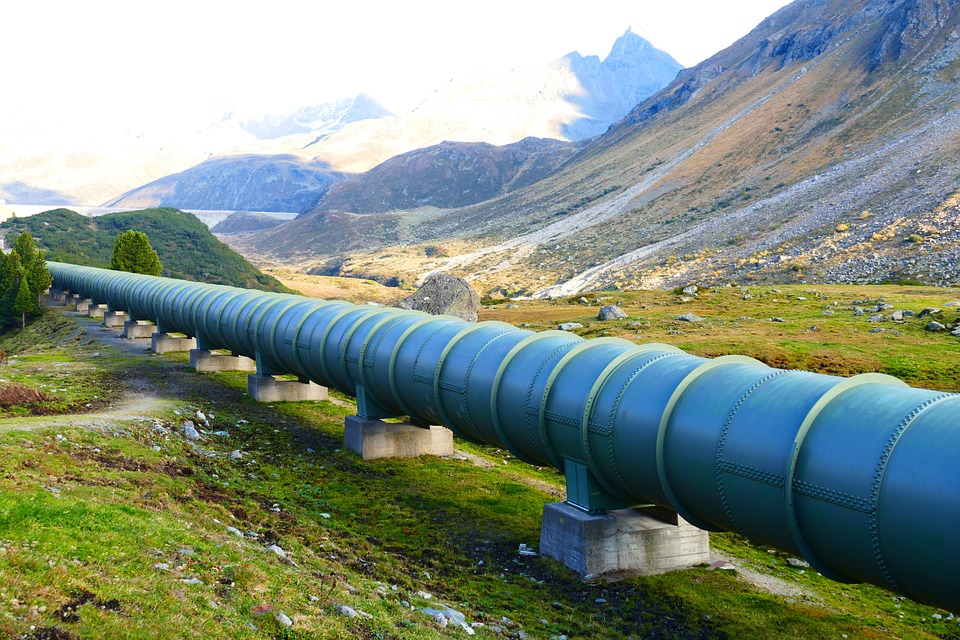 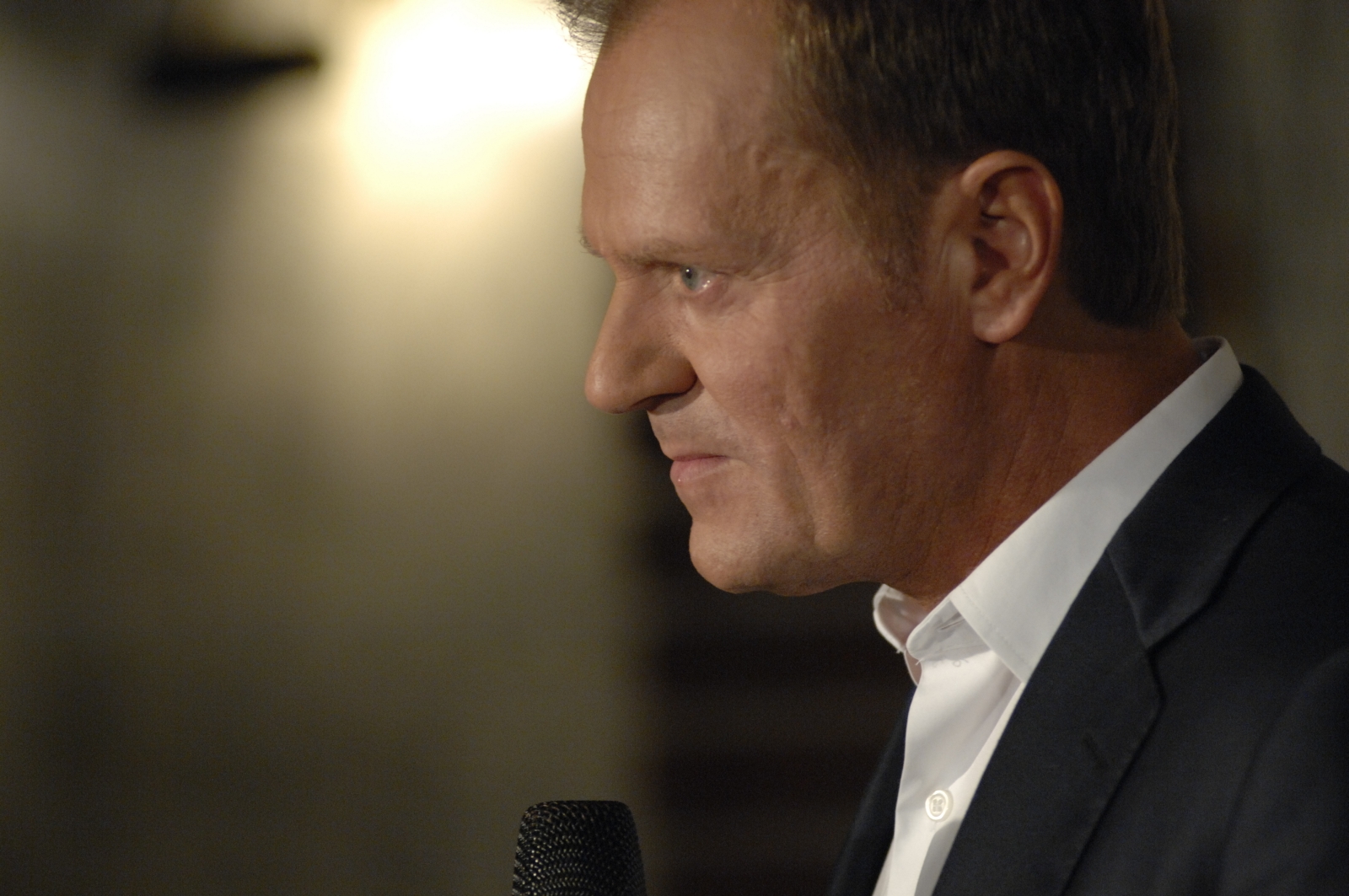